Robert A. Heinlein was so famous and well-respected in science fiction circles that he became like Albert Einstein or Noam Chomsky and was asked for his opinion on everything. Some of those opinions were about writing, which is why I’ve brought the subject up here. He said, ‘Never revise, except to editorial demand’. Jack Kerouac was also famous for saying, ‘First thought, best thought’, but while he might have famously written everything out on one spool of paper without interruptions, he was a planning maniac. His notebooks are crammed with very detailed information about what he was going to write once he sat down in front of the typewriter and paper roll and began to pound on the keys.

END_OF_DOCUMENT_TOKEN_TO_BE_REPLACED 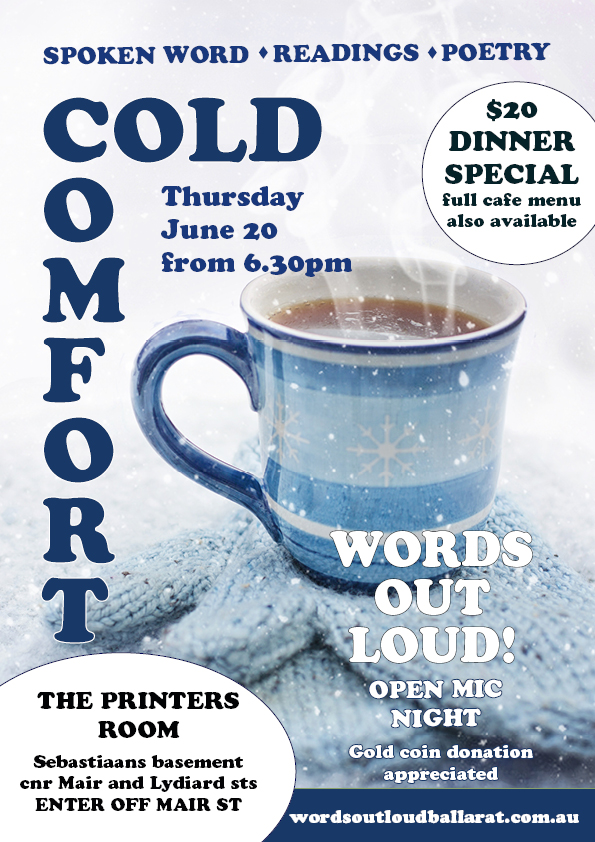 Words Out Loud embraces the onset of winter with the theme of “cold comfort” but be assured of a warm reception at our June edition.

Wordsmiths are invited to explore the theme or simply ignore it altogether.

END_OF_DOCUMENT_TOKEN_TO_BE_REPLACED

The BWI AGM will be held on Wednesday 8th February at the Bunch of Grapes Hotel. Committee reports for 2022 can be read here, where you will also find position descriptions, nomination forms for committee positions, and a proxy voting form.

* Social nights are usually held at the Bunch of Grapes on the last Wednesday of each month (except December).

Please see the federal Department of Health website and the Victorian government website for the latest information.

If you are unwell, contact the national Coronavirus Health Information Hotline on 1800 020 080.

The Ballarat City Council has information pertinent to the district at its website, including closure of facilities.

Theme by Anders Noren — Up ↑