Book review – Isaac and the Egg, by Bobby Palmer 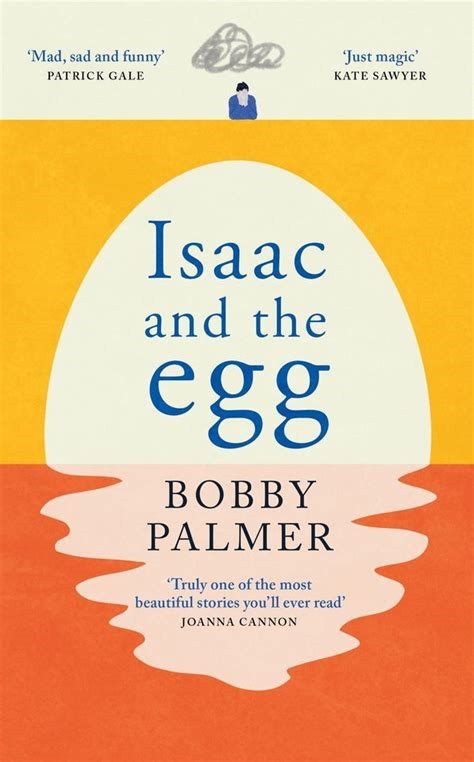 The Author
Bobby Palmer is a freelance journalist writing for publications such as Time Out, GQ, Men’s Health and Cosmopolitan. Isaac and the Egg is his first novel.

The Book
Billed as an uplifting story, Isaac and the Egg opens with the main character, Isaac Addy, perched on the edge of a bridge, willing himself to end it all by jumping into the freezing water below. When you are that low the only way is up.

In quintessential English eccentricity, Palmer sets about showing the reader the disturbed state of Isaac’s mind and his journey to ‘redemption’.

Isaac’s maudlin deliberations are interrupted by a scream emanating from the nearby woods. He investigates and finds a two-foot-high egg. For Isaac this is the beginning of his redemption.

The characters of Isaac and Egg drive the story in this novel, hence the title. Other characters include Isaac’s wife, his sister and mother-in-law. Despite the small parts these later two characters play, they come across as well developed, suggesting a depth to Palmer’s writing skills.

This is an interesting debut novel. It does require a suspension of reality, especially when it comes to Egg. Palmer has used the absurdity of Egg to give the reader a sense of Isaac’s traumatised mind. For those who need a more rational explanation, Isaac is probably suffering from trauma-induced hallucinations, and the Egg is a metaphor or substitute for…SPOILERS. Perhaps the term found in Victorian-era novels, “brain fever”, would be an apt description of the state of Isaac’s mind.

It is difficult to describe this story and not give away the plot. Suffice to say, Isaac has recently experienced the unexpected loss of his wife, the love of his life and inspiration. His adequacy to deal with life is on the line.

Egg is vulnerable and Isaac is its only hope for survival. Is this a last opportunity for Isaac to cope with responsibility – to grow up? This is essentially the underlying theme to Isaac’s story.

Palmer slowly peels away the layers to Isaac’s life, building the tension, gradually bringing the reader and Isaac back to reality with an emotionally charged ending.

This is an engrossing story. I found myself rushing through it, wanting to get to the resolution for Isaac.

There are a couple of useful lessons in this story. The grief we feel after loss can be dealt with, but we are changed. Our connections to others are important to helping us find our way, to make good decisions about how we change.

Regardless of how you like your eggs, this one is worth the effort, even if, at times, it feels a bit scrambled.

Review copy provided by the publisher

Writing in the Sand was written by Matt Garrick, an award-winning ABC journalist based in Darwin. His passion and focus is issues affecting the Top End, Darwin, Central Australia and Northeast Arnhem Land, writing extensively about politics, Indigenous affairs and music. Writing in the Sand is an authorised biography of NT band Yothu Yindi, and his first book, based on interviews with current and former band members, Yalmay Yunupingu and fellow artists including Peter Garrett, Paul Kelly, Neil Finn and Joy McKean.

The author has been following Yothu Yindi since first taken by his father to see them play in Sydney’s Centennial Park, working as the bands media coordinator and forming close relationships with members and their families.

In the introduction Yalmay Yunupingu, teacher and wife of the Yothu Yindi lead singer, the late Dr Madawuy Yunupingu, speaks of her husband, through his music, carrying ‘the true colours of green and gold, Australia, and red, yellow and black, his Yolngu heart’ and his aim to build bridges between all races. She writes of his work as an educator and school principal and the seeds he planted for the ‘both ways’ curriculum and school, which sought to combine mainstream Western education with Yolngu knowledge at its heart and including all aspects of traditional culture whilst simultaneously completing a degree in Education. Reference to this work is scattered throughout the book and strongly interwoven with his musical identity. In the process, Writing in the Sand performs a valuable service spreading awareness that Yothu Yindi itself through its lead singer has accomplished more than a great Australian rock song.

Something that comes across repeatedly is Mandawuy’s commitment to his cultural responsibility to recognise the needs of all Australians. Thirty years ago Yothu Yindi released Treaty, a bi-lingual rock anthem which gave voice to Indigenous Australia’s ongoing struggle for recognition but also to the need for a new relationship between all Australians.

The band (originally named Diamond Dogs – after David Bowie) , were a mix  of young Yolngu and non-indigenous (balanda) mates singing covers from the likes of Creedence Clearwater Revival, the Rolling Stones and Elvis,  and their own songs in the remote Top End, over time  slowly developing a new music, splicing traditional sounds with electric, spreading messages of unity.

Writing in the Sand contains a wealth of information about the band’s Yolngu roots in Yirrkala, a former missionary settlement, from which the band’s activity and the individuals within it cannot be separated.

We are told Yothu Yindi means ‘child and mother’ and their relationship. The mother is yindi and the child, yothu, each responsible for the other. This responsibility extends to other relationships, not just parent and child. The strict Yolngu kinship system allows opposites to coexist respectfully – something implicit in the message ‘Treaty’ sends. In calling itself Yothu Yindi the band further cemented the connection between Yolngu culture and the type of music they created as the voice of intermediaries in black and white relations in Australia in a way that aimed to unite.

This is expressed in lines from ‘Treaty’ (Tribal Voice, 1991) which refers to two rivers representing different cultural laws, currently separate, and how they must come together as one – not as assimilation but with each respected equally.

Writing in the Sand brings together these separate parts of his life,  character and his work together seamlessly still underlined by Yolngu foundations beneath all. But Garrick also speaks of an ‘old man named Balu (who) would position himself by the campfire serenading the kids with Slim Dusty songs’. Garrick speaks of them soaking up these country ballads playing their own part in the shared Australian musical landscape from which Yothu Yindi also emerged.

‘Treaty’ was written by Mandawuy with Paul Kelly and Peter Garrett, splicing English and Gumatj language, including songs and dances that dated thousands of years, using traditional instruments such as the bilma (ironwood clapsticks) and yidaki (didgeridoo) juxtaposed with English, drums, keyboard and electric guitar. Its form is described as a meeting between western rock song tradition and djantpangarri, a popular Yolngu popular musical form.

The song initially met with a cool reception but took off in a 1991 remix, spending 22 weeks in the national charts and winning multiple awards, attracting attention internationally. ‘Treaty’ is an intertwining of white and traditional Australian musical practice and Writing in the Sand shows how the two vastly different Australian cultures come together in its making.

Yolngu Matha language is scattered throughout the work, enriching the narrative, in contrast to the usual silence of Indigenous voices and words when anything relate to their lives is written. Supporting the main text is a useful glossary of Yolngu words. There are also many previously unpublished photos from the band’s archive across a wide range of musical, political and other collaborations and events involving both Indigenous and non-Indigenous people.

Written in the Sand is written in the easy-to-read, densely factual style of an author with journalist roots. It is a richly rewarding exposition of the band, the song, and the Yolngu and balanda setting from which it emerged.  It is an important work that many will find both accessible and instructive of both the band and a side of Australia many know little about despite often expressing strong opinions. It is interesting as a social historical document and for its wide-ranging look at the Australian music scene.  I would recommend it to readers interested in Australian cultural history and who want to know more about what it is to be Australian.

Review copy provided by the publisher

The BWI AGM will be held on Wednesday 8th February at the Bunch of Grapes Hotel. Committee reports for 2022 can be read here, where you will also find position descriptions, nomination forms for committee positions, and a proxy voting form.

* Social nights are usually held at the Bunch of Grapes on the last Wednesday of each month (except December).

Please see the federal Department of Health website and the Victorian government website for the latest information.

If you are unwell, contact the national Coronavirus Health Information Hotline on 1800 020 080.

The Ballarat City Council has information pertinent to the district at its website, including closure of facilities.

Theme by Anders Noren — Up ↑